Wrinkly Kong is the wife of Cranky Kong and grandmother of Donkey Kong, she is also an intelligent ally of the Kongs.

The first appearance of Wrinkly Kong was in the game Donkey Kong Country 2: Diddy's Kong Quest. Here Wrinkly manages the Kong Kollege where Diddy and Dixie Kong can save their game progress. Wrinkly, like her husband Cranky Kong can also give the Kongs information on the various items and objects found throughout the game.

In the Game Boy Advance remake of Donkey Kong Country 2: Diddy's Kong Quest Dixie and Diddy can also do a homework assignment for Wrinkly, called Wrinkly's Task. The purpose of Wrinkly's Task is too fill up a scrapbook, given to the Kongs by Wrinkly with pictures. For every page of the scrapbook filled up Wrinkly will give the Kongs a DK Coin.

Wrinkly next appeared in the Game Boy game, Donkey Kong Land 2. Here she once again gives hints to Diddy and Dixie, along with saving the Kongs progress.

In Donkey Kong Country 3: Dixie Kong's Double Trouble Wrinkly makes a return appearance. In this game Wrinkly seems to have retired as a teacher at the Kong Kollege, she now runs Wrinkly's Save Cave. In the cave Dixie and Kiddy Kong can save their game, the cave is also where the various Banana Birds the Kongs collect are stored. In the Game Boy Advance remake of Donkey Kong Country 3 Wrinkly's role is now decreased. Now Wrinkly serves no real purpose in the game except taking care of Banana Birds, which she seems to have become a spiritual follower of.

In Donkey Kong Land III Wrinkly's role remains relatively the same, she saves the Kong's progress. The only real difference between roles is that Wrinkly no longer cares for Banana Birds, which aren't in the game.

In Wrinkly's next appearance, Donkey Kong 64 it is revealed that she had passed on after the events of Donkey Kong Land III, dying peacefully in her sleep as shown with her spirit wearing a night gown. In Donkey Kong 64 Wrinkly inhabits Wrinkly Doors which are found in the entrance of every area except Hideout Helm. If a Kong steps in front of a Wrinkly Door, Wrinkly will pop out and, using here supernatural powers give that Kong hints on what to do in the area that the Kong is in the entrance too. 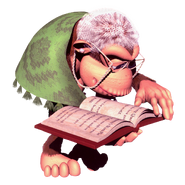