Start a Wiki
Wizards and Warriors in a platforming action game released for the Nintendo Entertainment System in 1987 in North America and Europe in 1990 and was the second title developed and released by Rare for the system. The game was developed by Rare.

The game follows the hero Kuros, the "Knight Warrior of the Books of Excalibur", as he is tasked with saving the Princess from the evil wizard Malkil in the Castle Ironspire with the forests of elrond. To do this Kuros uses the legendary Brightsword which has the power to defeat Demons, the Undead and all other creatures under Malkil power. Throughout the adventure Kuros ventures through the forest of Elrond and the hideout of Malkil.

Wizards and Warriors is a platformer game with several adventure aspects to it.The game follows Kuros through several levels in which he must jump from platform to platform while battling monsters. The game is somewhat linear going from area to area, though each screen is generally very open. Along the way Kuros must collect gems which allow him to increase his score. He can also pick up various different weapons, projectiles and powerups which allow him to defeat his foes easier and more efficiently with his standard sword. In order to progress through most areas you must collect multicoloured keys which allow you to pass through the door of the same colour. At the end of each level there is a boss that Kuros must defeat in order to pass the level. At the very end Kuros will save the damsel the boss held captive and your score will be totalled. 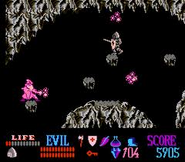 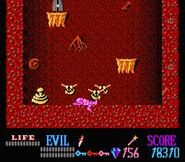 Add a photo to this gallery
Retrieved from "https://rare.fandom.com/wiki/Wizards_and_Warriors?oldid=22040"
Community content is available under CC-BY-SA unless otherwise noted.