Tricky the Triceratops is the first boss in the game Diddy Kong Racing and Diddy Kong Racing DS. He is the boss of Dino Domain. His track consists of a large spiral mountain with a statue of his head at the very top with the finish line. There is only one lap. His body is red with yellow stripes on his back and his eyes are yellow with red irises and black pupils. He also has his own kids revealed at the end of the game. One is pink and another is yellow. They all enjoy the moment after peace in Timber Island is restored.

Another Triceratops named Prince Tricky appears in Star Fox Adventures. It has been confirmed by Rare that the two were originally supposed to be the same character but their current connection is unknown. 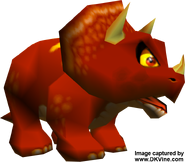 Talking to Pipsy
Add a photo to this gallery
Retrieved from "https://rare.fandom.com/wiki/Tricky_the_Triceratops?oldid=24431"
Community content is available under CC-BY-SA unless otherwise noted.