The Tediz are large, robotic Teddy Bears and the main antagonists of the game Conker's Bad Fur Day and it's remake, Conker: Live & Reloaded.

Though who first created the Tediz is unknown; what is known is that they were first used during the "Milk Wars". These early Tediz, unlike the modern ones seen in Conker's Bad Fur Day and Conker: Live & Reloaded, possessed many defects; the most obvious one being that they were made a highly-flammable material and their eyes had a habit of falling off.

Three-hundred years after the Milk War, the Tediz were re-commissioned by a weasel scientist named Professor von Kripplespac; who re-designed them and made them more durable.

The Tediz were then used as soldiers by the Panther King against the Squirrel High Command in a war, which was started for reasons unknown.

During his adventures through the Panther Kingdom, Conker encountered the Tediz several times, even being forced into infiltrating a Tediz base; which was subsequently destroyed when it self-destructed, destroying hundreds of Tediz soldiers.

Despite the death of the Panther King and Von Kripplespac at the end of Conker's Bad Fur Day/Conker: Live & Reloaded, the Tediz continued to war against the Squirrel High Command; this war is chronicled throughout the multiplayer portion of Conker: Live & Reloaded, where players can choose to be either aligned with the Tediz or the Squirrel High Command.

The war between the two sides has yet to be resolved and is currently ongoing. 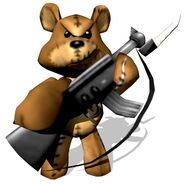 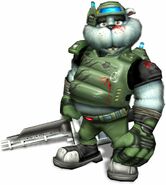 Tedi Sky Jockey
Add a photo to this gallery

Retrieved from "https://rare.fandom.com/wiki/Tedi?oldid=24436"
Community content is available under CC-BY-SA unless otherwise noted.