Roysten is Banjo's pet goldfish from the Banjo-Kazooie series that is usually seen swimming in his little fish bowl next to Banjo's bed. Though usually just part of the scenery he is also often shown in uncomfortable and sometimes deadly situations (though somehow always returns completely unharmed).

In Banjo-Kazooie Roysten lives in a goldfish bowl in Banjo's house. Here he swims around repeatedly in his fishbowl, and every so often, will tap the side of his bowl three times.

At the end of the game when Banjo and his friends are celebrating the rescue of Banjo's younger sister Tooty, Mumbo Jumbo can be seen grilling Roysten on Banjo's barbecue.

Roysten can be seen on the title screen as well as the introduction sequence and at the end of the game, still stuck to the barbecue he was fried on in Banjo-Kazooie. Banjo comments on wanting to clean the barbecue at the start of the game but never gets a chance to before Kazooie is kidnapped.

At the start of Banjo-Tooie, the third game chronologically in the series, Roysten ends up stuck under a boulder near the front of Banjo's House after a vengeful Gruntilda hurls a magic spell straight at the house, knocking Roysten off the barbecue. When Banjo investigates the rock at the start of the game, Roysten begs Banjo to break the rock so that he can escape. Banjo and Kazooie may come back when they have learned the Bill Drill move, so that the two can break away the rock for Roysten, who then asks to be returned to some water. When Banjo puts Roysten in the nearby river, Roysten teaches Banjo a faster swimming technique and doubles Banjo's air gauge so he can stay underwater longer.

During the character parade at the end of Banjo-Tooie, Roysten turns up in another unfortunate situation. He's cooked by Mrs. Bottles and sitting blackened to a crisp on a plate, with Bottles ready to eat him for dinner.

Roysten also makes a cameo appearance in the Game Boy Advance racing game Banjo-Pilot. He can be seen on a shelf in the game's Trophy Room. Starting from this game onwards, he is not seen being grilled on the barbecue by others or being on it at all.

Roysten reappears again in Banjo-Kazooie: Nuts & Bolts where he, along with the other characters, were redesigned. He is also a part of the Stop 'n' Swop part in this game. He just makes a cameo and otherwise does nothing else. He fully completes the Stop 'n' Swop part, Humba Boat 2. Unlike the other adventures, he is not seen on the barbecue.

In Grabbed by the Ghoulies for the Xbox, Roysten and his fishbowl can be found in the classroom of Ghoulhaven Hall. Like in Banjo-Kazooie, Roysten will swim around in circles and occasionally tap his bowl three-times. He also makes a cameo appearance in Viva Piñata as a decorative item. 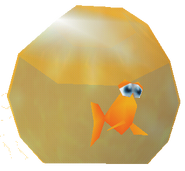 Banjo-Kazooie
Add a photo to this gallery 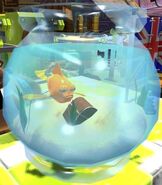 Banjo-Kazooie: Nuts & Bolts
Add a photo to this gallery
Categoty:Banjo-Tooie
Retrieved from "https://rare.fandom.com/wiki/Roysten?oldid=17294"
Community content is available under CC-BY-SA unless otherwise noted.