Pipsy the Mouse is a yellow mouse who wears a red hairbow with white polka-dots on it, a blue and white sailor suit and a pair of red gloves. She is from Tokyo, Japan and she speaks in a fake Japanese accent. She is one of the playable characters in Diddy Kong Racing and is the only female in this version of the game. Pipsy, along with the other playable characters such as Bumper and Conker, were contacted by Timber to aid them in freeing his island from control of an evil alien pig named Wizpig. Her theme instrument is a steel drum as it is heard in the background.

Pipsy reappeared in Diddy Kong Racing's remake, Diddy Kong Racing DS as, once again, a playable character. Her vehicles for the first version are pink and her vehicle number is 3. She rides on a pink Triceratops after peace is restored in Timber Island during the final scene. 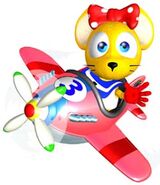 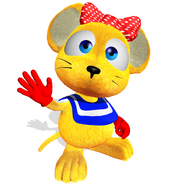 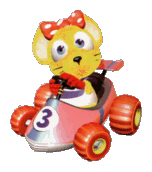 Diddy Kong Racing
Add a photo to this gallery 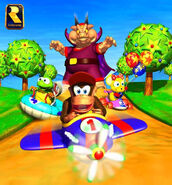 Promotional photo of Diddy and friends being chased by Wizpig. 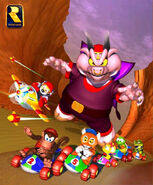 The Beach promotional photo (Pipsy is firing a missile on the background.)
Add a photo to this gallery
Retrieved from "https://rare.fandom.com/wiki/Pipsy_the_Mouse?oldid=24426"
Community content is available under CC-BY-SA unless otherwise noted.