Krystal is the main female protagonist of Star Fox Adventures, and one of the game's main goals is to free her from imprisonment. She was originally going to be a playable character in Dinosaur Planet and would have been a feline and relatively younger.

A World in Distress

Krystal first appears after she hears that Dinosaur Planet is in distress, and sets out to save it. She is fired upon by General Scales' flagship, and after overcoming some obstacles, and accidentally losing her staff, Krystal damages the ship enough to get onboard and speak to the ship's captain. General Scales confronts her and throws her overboard where a denizen of Dinosaur Planet (the same one she used to fight the big ship with), saves her from falling to her death and she makes her way to the Krazoa Palace.

Krystal hears from an injured EarthWalker that the Krazoa Spirits and Krazoa Palace are in danger. Shortly afterwards, she encounters the first Krazoa, who challenges her to one of many tests. This test was all about finding which vase the Krazoa was hiding in. After the challange was over with, she got possessed by the spirit and released it into its respective section of the palace.

While she was releasing the spirit, an unknown foe trapped her inside of a giant crystal, which was elevated to the rooftops and begins to drain her life force and remain there until all five remain spirits that are hidden are found. Sometime afterward, Fox McCloud who however found her staff when she lost it in the beginning of the game. At Moon Mountain Pass he and Prince Tricky gets a message from a Krazoa-like entity that Krystal needs his help as she begging for help that she needs the spirits in return or she will not survive, and sometime after Fox arrived at the Krazoa Palace, he encounters Krystal for the first time. Fox instantly became captivated by her beauty upon seeing her until Peppy snaps him out of it, much to Fox's chagrin.

It took awhile, but finally, after all six spirits are brought to the palace Fox begin to aware that something was definitely wrong as he begins to come very upset at the god as he and the god agreed if all the spirits are return she will be free but a price begins to pay as the spirits begins to go through her one by one and took it half of her energy however, Krystal is freed from her prison but almost fell to her death. Luckily, Fox saves her with her staff, but at a great price; Fox can't use her staff anymore, as it wasn't his to begin with, only temporary while she was trapped and the wicked Andross was revived. When Fox helped Krystal up with her staff, the two looked deeply into each others' eyes briefly, and thus it was true love at first sight. Krystal tried to fire blasts from her staff thinking Andross would be hurt, but he escaped unscathed. Fox then leaves her behind to battle Andross in space with his Arwing. After the final battle was over, Krystal managed to make it to the Great Fox and was able to apologize to Fox for her earlier behavior and to thank him for saving her. At first Fox was shy when Krystal thanked him in person, especially when Rob 64 sensed that Fox's temperature was rising, but Fox assures everybody that he is going to be just fine. When Peppy Hare announced his retirement to fly with the main team members, Krystal replaced him and became the Star Fox team's first female member. Over the course of her adventures with the team, Krystal and Fox both realized how much they truly loved each other since they first met back at Sauria. Eventually, after Fox disbanded the team and went into retirement after their last mission, he and Krystal both got married and then they had a son whom they named Marcus McCloud. Marcus went on to become the new leader of the next generation of the Star Fox team.

Kyrstal is a beautiful, good, kind, gentle, strong-willed and independent vixen who discovered that her hometown in her home planet and her world was destroyed decided to get answers she met an evil sharp claw name General Scales however she is not afraid of anything including one the first test however before becoming trapped in her prison she discovers Andross, who was expelled for his crimes of becoming mad with power. As she left a message for Fox, however, to temporarily use her staff for a while but becomes panicked that she begins to beg for help to save her life. After becoming free from her prison she became cold and selfish by taking back her staff from Fox, which it wasn't his to begin with but regrets it. Later, she apologized to Fox for being cold and bitter and selfish after she took back her staff. 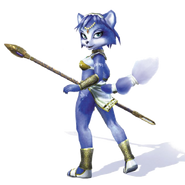 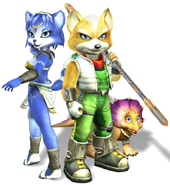 Star Fox Adventures
Add a photo to this gallery
Retrieved from "https://rare.fandom.com/wiki/Krystal?oldid=24462"
Community content is available under CC-BY-SA unless otherwise noted.