King K. Rool is the main antagonist of the Donkey Kong series, the older brother of K. Lumsy the ruler of the Kremling Krew containing the Kremlings and the archenemy of Donkey Kong, Diddy Kong and the Kong Family. His name is pronounced 'cruel', the 'K' obviously implied to follow the Kremling trend.

After venturing through the many regions of Donkey Kong Island, Donkey and the released Diddy defeated many of K. Rool's operatives and reclaimed their Golden Bananas, which were guarded by bosses. Finally, the Kongs managed to reach K. Rool's ship, the Gangplank Galleon. Here they faced the tyrannical crocodile in battle. K. Rool tried many tricks to defeat the Kongs, such as using his crown as a boomerang, trying to ram them, stomp them and shoot cannonballs at them. Though in the end, the Kongs managed to beat K. Rool after a long hard battle. Unfortunately the Kremling king managed to escape.

K. Rool returned in Donkey Kong Country's semi-sequel on the Game Boy; Donkey Kong Land. In this game, Cranky Kong calls up K. Rool, and demands he return to Donkey Kong Island and re-steal Donkey Kong and Diddy Kong's Golden Banana hoard; Cranky had made a bet earlier with Diddy and Donkey that they couldn't reclaim the bananas on a hand held system. In this game, K. Rool is fought in a blimp above Big Ape City, here his attacks consist mostly of the same as they did in Donkey Kong Country; running, jumping and throwing his crown. K. Rool is once again defeated, but once again goes into hiding to lick his wounds.

In Donkey Kong Country 2: Diddy's Kong Quest, K. Rool (under the alias of Kaptain K. Rool) manages to kidnap Donkey Kong and speed him away to the home of the Kremlings, Crocodile Isle. After discovering that Donkey has been kidnapped, Diddy and his pretty girlfriend, Dixie Kong, rush off to save him from K. Rool. After venturing through the swampy Crocodile Isle, Diddy and Dixie managed to reach K. Rool's Keep, where Donkey was supposedly held. Finding Donkey Kong in a tower, the Kongs were about to rescue him when he was whisked away by K. Rool (in the Game Boy Advance remake of Donkey Kong Country 2, K. Rool also sends the gigantic Kremling, Kerozene, to battle Diddy and Dixie).

After facing a few more obstacles, the Kongs managed to reach K. Rool's airship, the Flying Krock. Here Diddy and Dixie saw K. Rool in midst of torturing Donkey Kong. Engaging K. Rool in battle, the Kremling king used a high-tech blunderbuss that could be used as a vacuum, also allowing K. Rool to move at high-speeds, turn invisible, fire spiked Kannonballs and strange gasses that could effect the Kongs in bizarre ways, e.g. reversing the game's controls, making the Kongs move extremely slow and freezing them in place.

After a long battle in which the Kongs manage to do damage to K. Rool by hurling Kannonballs back into his blunderbuss - Donkey Kong managed to break free of the bonds that held him and uppercut K. Rool out the front window of the Flying Krock. Crashing into the swampy water of Krem Quay, K. Rool managed to swim ashore to the Lost World.

By collecting enough Kremkoins for Klubba, Diddy and Dixie manage to follow K. Rool into the bowels of the Lost World, into Krocodile Kore. Here, they battled K. Rool in an ancient palace, and once again, K. Rool is defeated when a Kannonball is hurled into his blunderbuss. This time instead of backfiring, the gun explodes, flinging K. Rool into a nearby geyser that supplied energy to Crocodile Isle. Due to K. Rool clogging the energy geyser, the pressure within it kept building up more and more until it exploded, taking the top of Crocodile Isle with it, the rest sinking.

At the end of the game, a ship can be seen sailing away from the remains of the island and an ominous laugh can be heard as the ship sails over the horizon, telling the player that K. Rool survived the explosion, making way for another sequel.

The Resurrection of Crocodile Isle

In Donkey Kong Land 2, K. Rool returns, once again kidnaps DK and rushes away to Crocodile Isle (which K. Rool had risen from the sea). Diddy and Dixie had to once again defeat K. Rool on the Flying Krock and in the Lost World. After defeating K. Rool, Crocodile Isle once again sinks to the bottom sea.

In Donkey Kong Country 3: Dixie Kong's Double Trouble, K. Rool was thought to have been replaced as leader of the Kremling Krew by the robot; KAOS.

Near the end of Donkey Kong Country 3: Dixie Kong's Double Trouble!, it is revealed that K. Rool (now called Baron K. Roolenstein) was now secretly running the Kremling Krew through KAOS, whom he had constructed. After defeating KAOS, Dixie and her cousin, Kiddy Kong began battle with K. Rool. Kiddy and Dixie finally manage to defeat K. Rool in a long grueling battle. Before he could be apprehended, though, K. Rool managed to escape.

If Dixie and Kiddy manage to collect all the cogs in Krematoa and give them to Boomer, K. Roolenstein can be fought again. After Boomer's machine awakens the ancient volcano in Krematoa a submarine, the Knautilus will rise from beneath the volcano's lava. Inside the submarine, K. Roolenstein can be found and battled. After a long battle, the Kongs manage to defeat K. Rool and send him flying once again. If Dixie and Kiddy manage to obtain all the Banana Birds in the game, and release the Banana Bird Queen, a small cut scene of K. Rool driving away in hover boat will be shown, suddenly a large egg will crash onto the Kremling king, courtesy of the Banana Bird Queen.

Search for the Lost World

In Donkey Kong Land III, K. Rool, along with Diddy, Donkey, Dixie and Kiddy, enters a competition to explore a newly discovered area of the Northern Kremisphere, as well as find the Lost World. Dixie and Kiddy must defeat K. Rool in a pipe in Tin Can Valley, and fight him in a cave in the Lost World

Though K. Rool does not appear in Diddy Kong Racing, he is the one who sent Krunch to spy on Diddy Kong and his friends. This happens again in the remake.

K. Rool returns in Donkey Kong 64. In this game, K. Rool (said to have become somewhat unstable), randomly appears one day on a large mechanical island. K. Rool had planned to blow up Donkey Kong Island with a weapon called the Blast-O-Matic, fortunately for the island's inhabitants, K. Rool's Ship ends up crashing due to the incompetence of the ship's drivers. In an attempt to distract Donkey Kong while he has his ship repaired, K. Rool has several Kongs imprisoned, these are; Diddy Kong, Tiny Kong, Lanky Kong and Chunky Kong. He also, once again, steals Donkey Kong's Golden Banana Hoard.

K. Rool, along with his pet Klaptrap appear in several of the game's cut scenes, watching the Kongs progress and chatsizing his own minions' failures.

After the Kongs permanently shut down K. Rool's mechanical island and Blast-O-Matic laser weapon, K. Rool tries to escape in a large airship. Unfortunately for K. Rool, the ship ends up being knocked to the ground and destroyed by a recently released K. Lumsy. Venturing inside the crashed vessel the Kongs found a boxing arena filled with spectators and K. Rool ready to battle. Engaging K. Rool in a bizarre series of battles - which include blasting out of barrels and into K. Rool's face, dropping spot-lights on the villain, causing him to slip on banana peels, shrinking down and blasting his toes and generally pummeling him - the Kongs manage to claim victory.

After Chunky delivers the final blow to K. Rool, a humorous cut scene is shown in which K. Rool, distracted by Candy, ends up being blasted over the horizon (again) by Funky and a bazooka. When K. Rool lands, it is in K. Lumsy's Island, where he meets a very unhappy K. Lumsy who proceeds to beat the Kremling king senseless in retaliation for locking him up.

In King K. Rool's most common appearance, he wears a red cape and a gold crown. When he took on the alias of Kaptain K. Rool, he traded in the cape for a brown trench coat and the crown for a pirate hat. When he becomes Baron K. Roolenstein, he wears a white lab coat and has a propeller on his back. As King Krusha K. Rool, K. Rool wore a pair of large overalls and boxing gloves. He also had a pair of old, brown shoes with a few holes in them. K. Rool's skin is light green (though some appearances show it as dark green), he has a large bloodshot eye and he is usually shown with jagged teeth.

K. Rool, as his name, a pun on "cruel", may imply, is often extremely brutal, ruling his minions through threats and intimidation and often punishing them severally when they fail. K. Rool is also somewhat of a dirty fighter, often collapsing in the middle of combat and making it seem like he has been defeated, only to rise seconds later and begin fighting again.

K. Rool seems to hate the Kongs for no real reason, referring to them as "filthy apes" and "monkey brains", though he doesn't treat his own soldiers much better either. Both Donkey Kong 64 and Super Smash Bros. Melee also seem to imply that K. Rool is somewhat insane and demented; the final battle of Donkey Kong 64 also showed him to be somewhat of showboater, constantly showing-off and making taunting gestures. 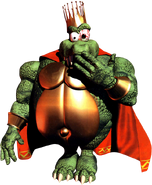 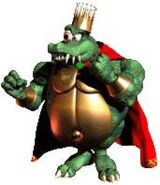 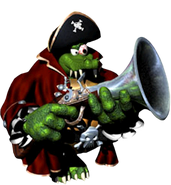 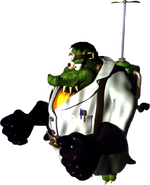 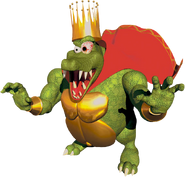 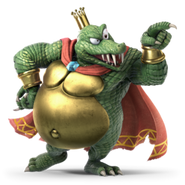 King K. Rool as he appears in Super Smash Bros Ultimate.
Add a photo to this gallery 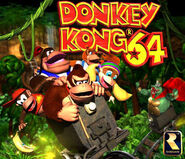 A promotional photo of all five monkeys on a Mine Cart, being chased by King K. Rool.
Add a photo to this gallery

Retrieved from "https://rare.fandom.com/wiki/King_K._Rool?oldid=24325"
Community content is available under CC-BY-SA unless otherwise noted.