Kameo is the main character in the game Kameo: Elements of Power.

Kameo is an elven princess and was given the ability to transform into ten Elemental Warriors. When her elder sister Kalus found out that her younger sister was chosen instead of her, she wanted revenge, so she kidnapped Kameo's family and released the evil troll king Thorn from his stone slumber. Kameo attacked Thorn's castle, trying to free her family, only to be overpowered by Thorn, and losing her Elemental Warriors in the process. The Mystic tells her that she must find the Elemental Sprites from the Shadow Trolls, in order to get her Warrior powers back. She must also rescue the warriors who fought alongside Theena and imprisoned Thorn. 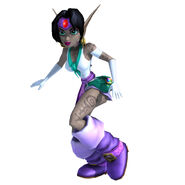 Kameo with wings
Add a photo to this gallery
Retrieved from "https://rare.fandom.com/wiki/Kameo?oldid=20559"
Community content is available under CC-BY-SA unless otherwise noted.