Gruntilda Winkybunion (or just Grunty) is an evil witch in the Banjo-Kazooie series and the antagonist of the series as she is Banjo and Kazooie's biggest enemy. She used to be green skinned. She has three sisters, Brentilda, Mingella and Blobbelda. She seems to be friends with Klungo. She lived in her lair with her minions, but her residence is currently at Cauldron Keep.

Gruntilda first appears in Banjo-Kazooie, as the main villain of the game. She asks her cauldron, Dingpot, who the fairest one in all the land is. Dingpot answers that Tooty, a young bear cub who happens to be Banjo's sister, is the much prettier than Gruntilda. In a rage, Gruntilda hops on her broomstick and flies to Spiral Mountain. She grabs Tooty and flies off, while Bottles the mole witnesses the whole thing.

Gruntilda attempts to turn herself beautiful which will result in Tooty turning into a much uglier and bigger version of herself, but before she gets a chance to, Banjo arrives. After a long battle, Gruntilda is knocked off the top of Spiral Mountain by the mighty Jinjonator. She falls deep under the earth, and a heavy rock seals her into the ground. As Banjo and friends celebrate their victory, Gruntilda calls for her assistant, Klungo, to move the boulder over and free her, while swearing her revenge against Banjo and Kazooie.

In Banjo-Kazooie: Grunty's Revenge, Klungo creates Mecha-Grunty a robot that Grunty's spirit possesses. After that, Klungo (under Grunty's command), kidnaps Kazooie and takes her to the past using a time machine. Banjo sets out to save and her, and after a long journey, frees Kazooie and defeats Mecha-Grunty.

However, Gruntilda has another plan. She plans to go back in time to stop Banjo and Kazooie from ever meeting. The duo confront her and are able to defeat her before she can perform this dastardly act. Mecha-Grunty then breaks apart, and the witch's spirit returns to its grave.

Ever-resilient, Gruntilda returned yet again in Banjo-Tooie. In the beginning of the game, Klungo is shown trying to move the rock that sealed her away. Help comes in the form of two of Gruntilda's sisters, Mingella, and Blobbelda. With their giant machine the Hag 1, they destroy the rock and free her. Unfortunately for Gruntilda, being stuck beneath the rock for quite some time has worn her down to the bone.

Luckily, Mumbo Jumbo was outside and saw the entire thing. Unfortunately, the witches catch him spying. Gruntilda fires a few bolts of energy at him, but the witch-doctor escapes into Banjo's House. Gruntilda then fires a large energy ball right into the house, in attempt to kill all of the residents.

Luckily, Mumbo was able to get inside and warn the others (who were playing a game of cards) that Gruntilda had returned. Banjo and Kazooie escape immediately, but due to being tricked by Kazooie earlier, Bottles thinks it is a joke and stays inside. He is, tragically, killed in the resulting blast. Gruntilda and her sisters then quickly left to Spiral Mountain, but not before leaving behind a regiment of monsters (including Klungo) to stop the survivors.

When they reach Cauldron Keep, Gruntilda is introduced to B.O.B., a large laser with the power to suck life power out of living things. Her sisters explain that they use the laser to give her her original body back. Delighted, Gruntilda decides to zap King Jingaling, because he had given Banjo and Kazooie a Jiggy. The blast turns the king into a zombie, but barely fills up B.O.B.'s energy meter. Gruntilda is all for blasting the entire island, but her sisters explain that B.O.B. has to recharge first. Gruntilda says that that's okay, with Bottles dead and King Jingaling a zombie, the bird and bear won't get a chance to get to them anyway.

Obviously, Gruntilda is wrong, because Banjo and Kazooie do get to Cauldron Keep before the laser can recharge. After fighting their way past Klungo, Mingella, and Blobella, (and restoring health to Bottles and Jingaling via the blow button on B.O.B.) Banjo and Kazooie challenge Gruntilda on the roof of the building. However, Gruntilda is inside the machine that was used to free her, and thus has more defense than ever before. Gruntilda tries many tricks, including poisoning the air and summoning monster's, but eventually, Kazooie sends a Clockwork Kazooie Egg into the machines main engine chamber, destroying it and sending Gruntilda's skeleton scattering in different directions.

Even after this, the witch still does not die. Her head is seen at the end of the game, vowing revenge as the heroes play kickball with it.

Gruntilda is playable, in skeleton form, in the Multiplayer mode of Banjo-Tooie.

Gruntilda was also playable in Banjo-Pilot. In this game, she is, inexplicably back in her mortal form.

Gruntilda appears as the antagonist of Banjo-Kazooie: Nuts & Bolts where she is competing with Banjo over ownership of Spiral Mountain. If she wins, she intends to pave over Spiral Mountain and turn it into a mall.

Throughout the Banjo-Kazooie series, Gruntilda has shown the unusual ability to work well with both magic and machines. In Banjo-Kazooie, she uses her magic more than anything else, flying on her broom and casting spells. She apparently does not need a wand to cast spells, unlike Brentilda. In Banjo-Kazooie: Grunty's Revenge she is actually transported into a mechanical body, which she uses with apparent ease. In Banjo-Tooie she uses magic to blow up Banjo's House in the beginning of the game, but during the boss battle she pilots the Hag 1.

Politically speaking, Gruntilda is not as powerful as villains from other series such as Bowser or Dr. Robotnik. It is revealed in Banjo-Tooie that her spell-book Cheato, her sister Brentilda, and her cauldron Dingpot are actually all allies of Banjo. By the end of Banjo-Tooie, her personal assistant Klungo had deserted her, and two more of her sisters Mingella and Blobbelda are supposedly dead. Many monsters are seen in and coming out of the Hag 1, but it may be that these are un-intelligent creatures created by magic, as none are actually seen in the building area of Cauldron Keep. She does, however, gain an ally in Nuts & Bolts in the form the Piddles the Cat and the Gruntbots, However, as soon as she lost LOG's game, these minions were no longer in use, and Piddles became her boss. 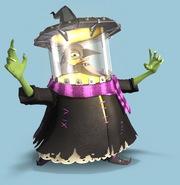 Banjo-Kazooie: Nuts & Bolts
Add a photo to this gallery

Banjo-Pilot
Add a photo to this gallery

Retrieved from "https://rare.fandom.com/wiki/Gruntilda_Winkybunion?oldid=23897"
Community content is available under CC-BY-SA unless otherwise noted.