Drumstick the Rooster is a rooster that lives on Timber's Island in Diddy Kong Racing and is well-known among the locales for his racing skills. Constantly training on the island's many tourist-trap racetracks, Drumstick has honed his ability to become one of the greatest racers on the island. While his mastery of speed isn't in question, it was because of the confidence that stemmed from this that he was punished at the hands of an intergalactic pig.

When Wizpig took over the island, Taj, T.T., and Timber planned an immediate counter-offensive. They went to Drumstick and asked him to face down Wizpig in a race, with the stipulation that if Drumstick won, Wizpig would leave the island. Drumstick agreed, and all doubted that Wizpig would come out on top as the victor. However, some time passed and Drumstick has not returned. It was after this failure that Timber sent out a plea of help to his old friend Diddy Kong which led to a slew of racers both native and from elsewhere to help race Timber's Island to freedom.

In the midst of the racing adventure led by Diddy and Timber that would liberate the island, the slow defeat of Wizpig's magic also led to a reveal of sorts in the main meadow of the island. In the pool of water where the island's waterfalls came crashing down over the mountainside lived many frogs. After completing world four and collecting thirty-nine Golden Balloons, the heroes came upon of a frog was unusually sporting red plumage sprouting from its head. On a hunch, one of the racers ran over it with their vehicle, and in a brilliant flash of gold, Drumstick appeared. Wizpig had turned him into a frog, and it wasn't until his frog form was destroyed that he was able to be free. He immediately joined with the others in the fight, staying with them until the end.

Drumstick is believed to still be living on Timber's Island, spending his days (and nights) perfecting his skills on the track.

Drumstick can be unlocked in a different way in Diddy Kong Racing DS, the heroes must come upon a frog, throw him onto a ledge. Then, the frog comes down, revealing a red comb. The player must drive over this frog to unlock Drumstick, who was apparently the frog transformed by Wizpig. 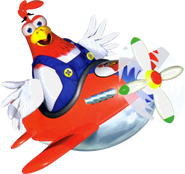 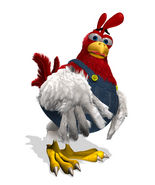 Diddy Kong Racing DS
Add a photo to this gallery

Diddy Kong Racing
Add a photo to this gallery
Retrieved from "https://rare.fandom.com/wiki/Drumstick_the_Rooster?oldid=20461"
Community content is available under CC-BY-SA unless otherwise noted.