Dingpot is a cauldron used by Gruntilda in the Banjo-Kazooie series. He dislikes working for Grunty as apparently she vomits and cleans her dirty underwear in him. He is shown to also help Banjo and Kazooie. Unlike other some of the other Warp Cauldrons, he is shown with a constant frown and has one gold tooth sticking out. In his first two games, Dingpot has green eyes.

In Banjo-Kazooie, he appears in the opening movie inside Grunty's Lair with Grunty asking Dingpot who is the fairest in the land (expecting it to be herself) and Dingpot reveals it is Banjo's little sister Tooty making Grunty kidnap Tooty and steal her beauty. Dingpot is not seen again till Banjo finishes Grunty's Furnace Fun and rescues Tooty. Banjo and Kazooie then meet Dingpot while chasing Grunty up the tower. Kazooie comments on how stinky Dingpot is and Dingpot explains the hardship that Grunty has put him through. He then tells the pair to jump into him and he will help them. Banjo then jumps in with a reluctant Kazooie and Dingpot boosts them up to where Grunty was.

Dingpot later reappears in Banjo-Tooie again near the end (and in pretty much the same situation with Grunty running to the top of the tower from Banjo and Kazooie and him being there right before the battle) in Cauldron Keep. When Banjo and Kazooie meet Dingpot again Kazooie again mentions Dingpots bad smell and remembers about when they last meet. Dingpot then tells Banjo and Kazooie to jump in him which they do. Dingpot then gives the player maximum of all eggs and feathers so they can defeat Grunty. No explanation is given why Dingpot is still with Grunty or how he got to Cauldron Keep.

Dingpot reappears in Banjo-Kazooie: Nuts & Bolts as a minor character whom Grunty uses as a seat in her vehicle. He only moves his eyes and occasionally opens his mouth when the vehicle crashes. He has no lines in the game. 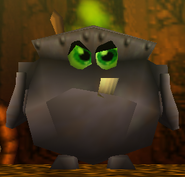 Banjo-Kazooie: Nuts & Bolts
Add a photo to this gallery
Retrieved from "https://rare.fandom.com/wiki/Dingpot?oldid=23257"
Community content is available under CC-BY-SA unless otherwise noted.