Cranky Kong is Donkey Kong's fourth-wall breaking and constantly complaining and rambling grandfather of Donkey Kong. Cranky is also, confirmed to be the original Donkey Kong in the Donkey Kong Country instruction manual.

Cranky Kong's first appearance was in the arcade game Donkey Kong where he was younger. He kidnapped Mario's girlfriend Pauline on the top of a construction site. Mario defeated him and was released by his son Donkey Kong Jr.

Apparently after his defeat by Stanley, Cranky migrated to Donkey Kong Island where he grew old and bitter. Cranky's first appearance as Cranky was in Donkey Kong Country. Here Cranky lives in a slightly rundown shack, from here Cranky gives advice on the game's various items and locations to his grandson Donkey Kong and Donkey Kong's nephew Diddy.

Though Cranky is not actually in Donkey Kong Country's Game Boy sequel, Donkey Kong Land, he is the one that sets off the events of the game. Cranky, slightly jealous of Donkey and Diddy's success over the evil King K. Rool tricks them into making a bet with him; if Donkey and Diddy can reclaim Donkey's Banana Hoard from King K. Rool again, this time on an eight-bit system, he admits that they are adequate gaming heroes. In the end, Cranky ends up eating his words when Donkey and Diddy once again defeat K. Rool and the Kremling Krew.

In Donkey Kong Country 2: Diddy's Kong Quest Cranky sets up his Monkey Museum on Crocodile Isle. Once again Cranky will give out information, this time for a price. In this game Cranky also scatters several DK Coins throughout the game's various. Once Kaptain K. Rool is defeated Cranky will tally Diddy and Dixie's "hero status" by how many DK Coins they have collected. Donkey Kong Country 2 also introduced Cranky's wife and Donkey Kong's grandmother, Wrinkly Kong.

In the Game Boy Advance remake of Donkey Kong Country 2 Cranky's role remains relatively the same as in the original game. Although a new sidequest involving Cranky was added to the game; it seems with the "fabulous fortune" he made in Donkey Kong Country Cranky bought a racing ostrich he names Expresso. After bulking up Expresso using feathers, the Kongs can race Expresso II for Cranky and try to get trophies for the grouchy old Kong in exchange for rewards.

In Donkey Kong Country 3: Dixie Kong's Double Trouble Cranky is more or less a cameo and not a helper in this game. In Swanky's Sideshow, Cranky Kong acts as Dixie and Kiddy Kong's opponent in the ball throwing mini-game. Cranky also appears at the end of Donkey Kong Country 3: Dixie Kong's Double Trouble! to criticize Dixie and Kiddy's victory over KAOS and Baron K. Roolenstein. If players manage to get the game's "best" ending Cranky, can be seen doing a few water-skiing tricks before holding up a sign which says "THE END" in runny ink.

In the Game Boy Advance remake of Donkey Kong Country 3, Cranky runs several dojos, aptly named Cranky's Dojo to prepare for his "first" game, Cranky Kong Country. In Cranky's Dojo, players can gain the ability to play as a shield wielding Cranky during a Spiny dodging mini-game. Cranky's Dojo mini-game must be completed at least once to gain a Banana Bird.

Cranky's next appearance is in Donkey Kong 64. Here Cranky has seemingly taken up science as a hobby; Cranky's Lab can be found in every area of Donkey Kong 64 except Hideout Helm. At Cranky's Lab, the Kongs can pay for several potions that can give them new powers and abilities. Also if the Kongs manage to collect fifteen Banana Medals Cranky will allow them to play Jetpac, an early Rare game. The Kongs must beat the Jetpac game in order to obtain the Rareware Coin. Cranky also acts as the Kongs coach during their boxing match against King K. Rool.

Twelve years later, Cranky appeared as an unlockable playable character in Diddy Kong Pilot in the 2003 build. In the 2001 build, he was a default character. In the 2003 build of the game, he has the highest stats of all characters and is the only member of Team Cranky. 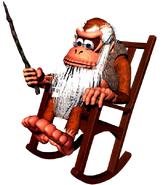 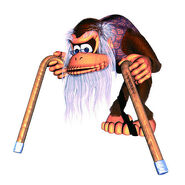 Promotional photo of Donkey and Diddy at Cranky's Cabin with Cranky in the background.
Add a photo to this gallery

Diddy Kong Pilot (Selection 2003 build)
Add a photo to this gallery
Retrieved from "https://rare.fandom.com/wiki/Cranky_Kong?oldid=24333"
Community content is available under CC-BY-SA unless otherwise noted.