Conga the Ape is, as his name states a giant ape whom appears as a character from the Banjo-Kazooie series.

Conga is first encountered in Banjo-Kazooie on Mumbo's Mountain where he stands atop a tree, throwing oranges at anyone who approaches. Banjo must trick Conga into throwing his oranges onto three nearby, orange emblazoned pads in order to gain a Jiggy, or "gold" as Conga calls it.

After doing this, Banjo can climb Conga's tree and grab an orange off of it and give it to Chimpy for a Jiggy and access to a higher ground. On this higher ledge, Banjo can battle Conga by blasting him with Kazooie's Blue Eggs; every time Conga is hit with a Blue Egg, he will retaliate by throwing oranges at Banjo. After being hit three times, Conga will be defeated and players will gain a Jiggy.

Conga reappears in Banjo-Tooie as, once again, a character in the game. He guards the Big Top tent in Witchyworld and only let visitors in if they have four tickets. When Banjo and Kazooie give him the four tickets, he lets them in to watch the show. In this game, he wears red carnival clothes and has a rope, meaning that he possibly is a tamer somewhat.

While he does not make an actual appearance in the game, he is mentioned in the description of the Citrus Slick. 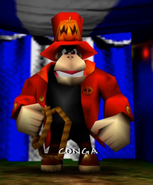 Banjo-Tooie
Add a photo to this gallery

Retrieved from "https://rare.fandom.com/wiki/Conga_the_Ape?oldid=21786"
Community content is available under CC-BY-SA unless otherwise noted.